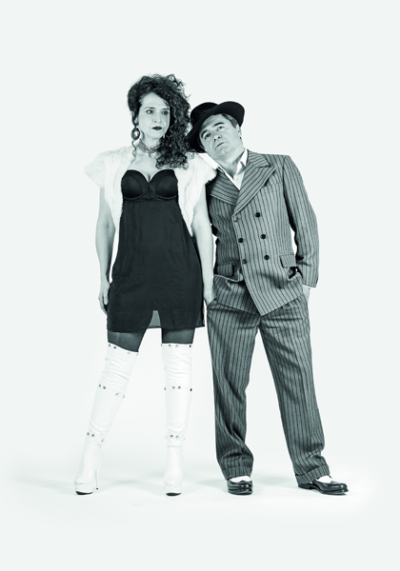 “Hello, my respectable gentlemen Brecht and Weill; your days should be numbered just like your revolting town of Mahagonny’’, wrote the music magazine following the scandalous première of “Mahoganny’’ on 9th March 1930 in Leipzig.  The audience were confronted with a piece that was brutal and needlessly provocative, coupled with the meaningless and ultimately self-destructive workings of capitalistic society.

First of all, a town was founded. Fatty, Moses and the widow Begbick decide to create a place in the world that should make money.  They wanted to outwit the system that they had chosen and christen it “Mahagonny, the Traptown’’. But the system could not be outwitted, and the traps remained empty. People visiting Mahagonny do not bring money, only dissatisfaction. The longing for zero is the one Utopia left. Only Jim Mahoney conceives a concept of being alive that reveals the fundamental questions of our time: How do we want to live? What does society mean? And:
in what way am I human?

Whilst Kurt Weil (1900-1950) in the late 1920’s, was composing the music for “Mahagonny’’, Bertolt Brecht (1898-1956) was working on the first draft of his “Theory of the Epic Theatre’’ in which he made fun of the normal workings of opera. He called for “a radical separation of the elements’’ by means of which “music, speech and i
mage…would contain more independence.’’

Jacopo Spirei, who at the Salzburg State Theatre was responsible for the Don Giovanni rehearsals and the Austrian Première of Brokeback Mountain, now brings to the stage Weills’ and Brecht’s social-critical Musical. The Mozarteum Orchestra plays under the direction of Conductor Adrian Kelly.